Our family is not having a very good time at the moment, we are ricocheting from one disaster to another.

Sometime towards the end of September (forgotten date)my Stepfather was admitted to hospital by ambulance as he was very sick and blood tests taken showed his blood to be all skewiffy.

On arrival in ED he was still speaking clearly if somewhat muddled and was attempting to eat. He could still walk.

A week or so later they were able to ascertain that the source of infection was traced to a heart valve and is a condition called Endocarditis. This flicked off infection to his blood stream and caused the Sepsis. He was placed on specific antibiotics and when finished the course last week was discharged free of infection to a private hospital we found for him.

The medical staff have told us it is a miracle that he survived it. The sad thing is he did survive it as the damage done is irreversible. A CAT scan showed his brain is now very small, he is bed ridden, incontinent and can only eat small amounts of pureed food. He sleeps most of the time but on occasion does wake up and tries to talk. I am quite sure he understands a lot of what we tell him when he is awake.

Unfortunately he has gangrene on one foot but will not be operated on as he would not survive an operation.

He is dying and is receiving palliative care at a very nice private hospital. He is being kept comfortable, clean and pain free. It is a shocking thing to witness. I really hope he slips away before there is further deterioration.

Then last Saturday one of my Mum's beloved cats was run over, dear little Hamish. My Mum was devastated as we all were, being animal lovers.

Just to top it off Mum had emergency surgery last Tuesday night for something called a femoral hernia.

She went to her Doc on Tuesday, she had found a large lump in her groin area. She had an ultra sound that afternoon and I had to take her to hospital at 4.30pm, she was operated on at 7.30pm. Apparently this kind of hernia can be very nasty if the bowel becomes involved and can also cut off blood supply. Fortunately her bowel was not involved so it was a straight forward if very painful surgery. She is recovering well.

I am cheering myself up with a little skullduggery! A house in our street has these wonderful yellow roses growing on the outside of their fence line. I have been picking them in the dead of the night for our house and my stepfathers room. I figure I am doing the rightful owners a favour by encouraging growth. They smell heavenly! 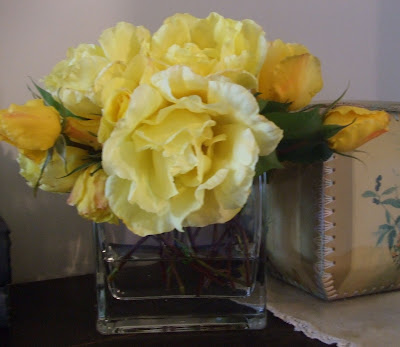 Mum and I did take a nice trip two weeks ago to Dunedin for my Great Aunt and Uncle's 60th wedding anniversary. It was a wonderful family reunion. My cousin Cheryl has the most wonderful old fashioned garden and she made Mum and I beautiful tussie mussies to bring home to Auckland. Here is mine on my dining table. 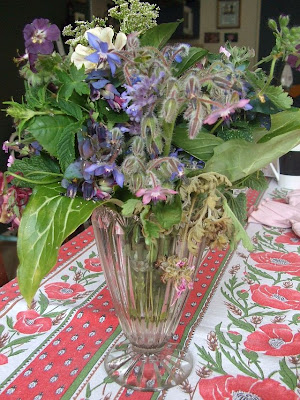 Sometime back in September my brother who lives in Australia flew his 14 year old female Jack Russell to us as he can not have her on the mining site he is working at. Her name is Tilly and she has adapted so well to being with us. Its lovely to have a dog again, first time we have had such a little one, our last one was a Boxer! 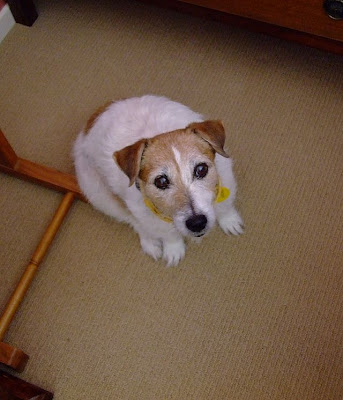 The extent of my creativity at the moment runs only to arranging The Princess's dinner in a creative way to entice her into eating well! 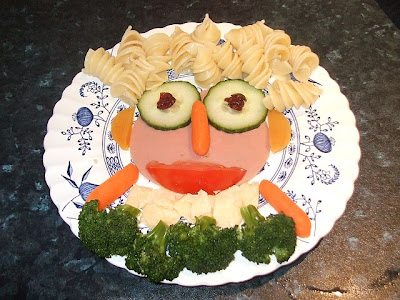 Thank you also much for the lovely supportive comments that have been left. So appreciated. I have been lurking in the background keeping up with what you are all doing and as always it has been a lovely escape from my real world.