BEST LAID PLANS
I hosted a Wasband family lunch today that I decided on Thursday would be a good idea to do and like many people, I like things to be 'nice' for my guests.  Yesterday, the Cowboy and I cleaned, just weekly cleaning, vacuuming, bathrooms that sort of thing.  I planned my dish, a quiche, wrote a shopping list and did the shopping. By the time I got into bed last night, I was feeling confident that all was in order and all I had to do in the morning was get up, wrap gifts, write cards, make the quiche and set the table all nice. Oh, and make me look all nice. Organised, right?

THE BIRD
I came downstairs at 9am after having showered and made the bed. I opened the curtains and that is where it all went wrong. Horribly wrong. Dreadfully wrong. Sickeningly wrong. Lying under the coffee table, on the thick shaggy rug was a bird. A dead bird. In pieces. Big pieces. Small pieces. Feather pieces. Other pieces. The Cowboy had left earlier for a day of motor racing so he was of no earthly use to me. I didn't know what to do; I am terrified of birds, even dead ones, in pieces. I took the most sensible option I could think of and simply left the house. I went to Mitre 10 and bought coffee and a plant for the table and hoped that when I got home the bird would be magically gone, a mere figment of my imagination. Alas, no. It was still there. In pieces. What to do. I donned my bright green dishwashing gloves and carefully, avoiding looking at the carnage as much as I could, picked up the many remains of the dead bird. Then I scrubbed the thick shabby rug with disinfectant, every which way the pile went. I then sprayed a disinfectant spray. Everywhere. All over the rug and a pathway of carpet from the rug to the cat door in the garage. Might I add not a cat to be seen. Guilty! Then I cooked and set the table and did not get to make myself look nice. By the time the family guests arrived, I was very frazzled looking. Just normal really! 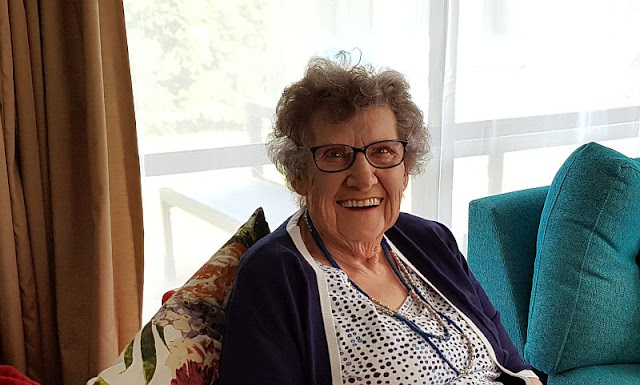 Anyway, in the end, it was all lovely. I hosted the lunch because it is Amah's birthday tomorrow, she is a Guy Fawkes baby and is a cracker! See what I did there - haha. I have talked about Amah before. She is the Wasband's grandmother making her the Princess's great-grandmother. She is called Amah because when the Wasband was a little boy he couldn’t say, Grandma, he called her Amah and it stuck. We all call her Amah; even my Mum calls her Amah.  Amah turns 92 tomorrow and she is truly remarkable. I have probably said this before as well! She has survived so many major health complications and she now has Motor Neurone Disease. Her social life is better than any of us, she still does cross-stitch, uses Facebook, texts better than most of us and can get a leg up, up I say, not over ;-) Amah has the best giggle, it's infectious and we all love her. 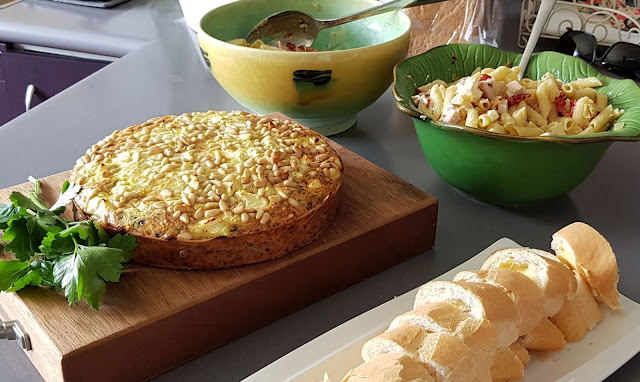 Lunch was divine, I made a Chelsea Winter Self-Crusting Spinach and Feta quiche, Eileen made Pasta and Smoked Chicken salad and Potato and Bacon salad and the Wasband brought along beautiful crusty bread.  We finished with a birthday cake made by Eileen, I can’t remember the name of the cake, a type of sponge cake anyway, with pretty icing. I'm not a big cake eater but it was really good. 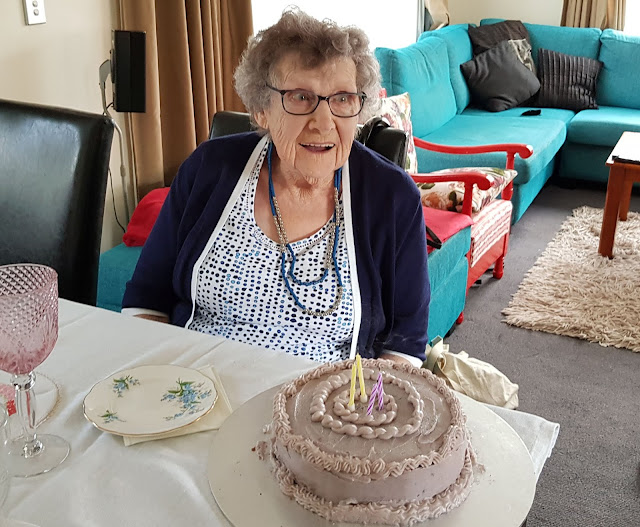 THE END
The guests have now gone home, I've cleaned up, the Princess is studying (NCEA Exams) and the cats have skulked inside to their food bowl and are now sitting at my feet. Under the coffee table. The crime scene. Cruel, murderous little creatures!