I can't believe it has been so long since I have posted, so much has happened since, which I guess is why I haven't posted, way too busy!

In late January the Cowboy moved in with us. This was very exciting and very exhausting as I had to make room to 'absorb' the Cowboy and his belongings and create a bedroom for his boy who stays with us over weekends.  This involved a major sort out, de-clutter and getting rid of stuff which was much needed and long overdue.

The Princess turned 10 in March, she is so close to being as tall (or small) as me  - haha. The Cowboy's boy turned 16 three days later and in April the Cowboy turned...something ;-).  Aside from birthday celebrations, since January we have had something on every weekend, apart from one!

I spent all of term one (10 weeks) on practical experience in a local Primary school with a Year Six class.  I absolutely loved my 10 weeks with the class and  learned so much .It was very sad at the end when I had to say goodbye, I was so spoiled with flowers, gifts and cards!
The end of term one on the 19th of April was the completion of my teaching degree after 3 and a bit long and eventual years!  My Mum gave me this beautiful bracelet made by jewellery designer Colleen Toland. 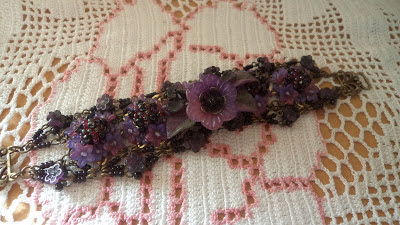 I'm now applying for a full time teaching position but in the meantime I have part-time work in the school I was at last term.  It's so exciting to know tomorrow I am going to go to work and get paid for it, its been a long time!

I'll be back...this time much sooner than 4 months!